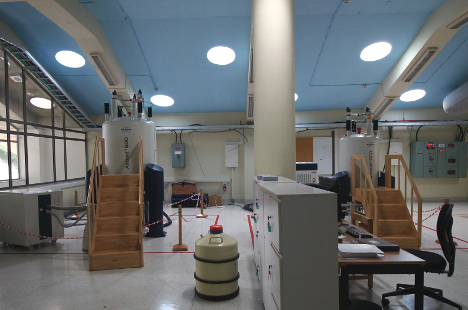 Welcome to the Biomolecular NMR Facility page!
The NMR Facility is dedicated to providing state-of-the-art NMR technology as well as exceptional NMR experties. Together with X-ray crystallography, NMR spectroscopy is one of the two leading technologies for the structure determination of biomacromolecules at atomic resolution. In addition, NMR provides unique and important molecular motional and interaction profiles containing pivotal information on protein function. The information is also critical in drug development. Some of the applications of NMR spectroscopy are listed below:

Equipment available at the NMR Facility:

Sample Requirements:
Although NMR facility is dedicated to all kinds of possible applications, biomolecular research is the major emphasis. Biomacromolecular solution NMR study is the most important focus. Listed below are some basic common requirements for sample preparation, in particular protein samples in solution biomolecular NMR experiments.